Full EQUALITY BEFORE THE LAW For LGBTQIA Nebraskans

Nebraskans For Equality Stands With Harvey.

Harvey Fierstein
It’s time to start paying attention to what’s going on in Russia in case you haven’t yet. Putin has declared war on the gay community. He’s made it illegal to promote homosexuality in theater, film, tv, print that in any way could be seen by youth. In other words anything gay is now pornography. He’s outlawed the adopting of Russian children to any country that has legalized marriage equality. And now it is reported that his next law will remove the children of GLBT families from their homes. This will apply to biological children as well as formerly adopted ones. This is a horror. Not only for our community but even for straight families. Already divorced parents are threatening one another with blackmail to tell authorities that their ex is now gay just to control parental rights. Putin wants this attack against human rights to be his legacy. He believes he can get the backing of the Vatican as well as all other conservative religious leaders to join his cause. What can we do? Make his actions and his plans public. Shine the light of public opinion on this evil doer.
Boycott the Winter Olympics in Russia. Believe me, Putin will use the Olympics as proof that the world backs up his action. There are only two ways to deal with a tyrant: Starve out the rat, or destroy him. So, my friends, do your research and then GET LOUD AGAINST PUTIN AND HIS ANTI-GAY POGROM. This is a very small world. Our brothers and sisters in Russia need us NOW! Read Harvey’s full New York Times Op-ed here. 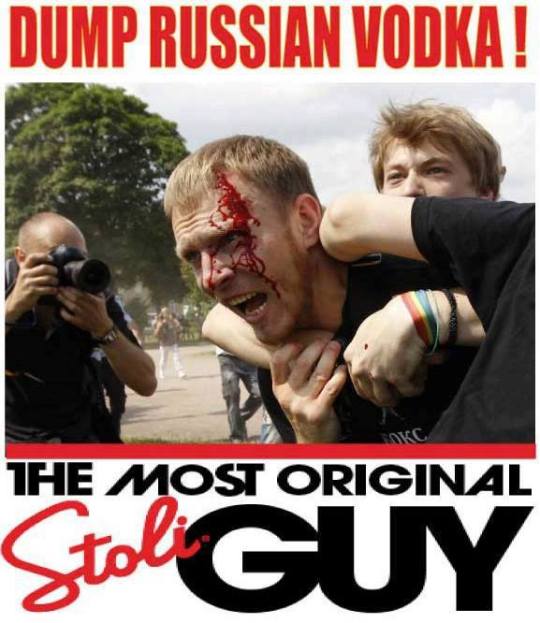 BoyCott the Olympics and Russian Products!

What is going on in Russia is disgusting and should not be tolerated by gay people anywhere.  The laws being imposed by Putin are encouraging radical members of the populace to hurt members of the LGBT community.  We can stand against these atrocities with not only our voices, but also our dollars.  Please, join the boycott against Russian products.  Many gay bars in the largest cities around the country are removing Russian vodka from their shelves as a show of solidarity with our counterparts fighting for their rights and their lives in Russia. As bad as it can get here in the US, the situation in Russia has taken a significant dark and dire turn.

Our Brothers and Sisters in Russia Proclaim they will not be silenced!

From Cleve Jones:
Here are the top ten corporate sponsors of the 2014 Winter Olympics. Let them know you’re concerned about human rights in Russia and the attacks on LGBT people and women.