Full EQUALITY BEFORE THE LAW For LGBTQIA Nebraskans

The new network is uniting the grassroots and state groups like never before, breaking the corporate insider mold with direct empowerment of local experts. Over 40 activists in 22 states are serving as volunteer state leads, including Attorney Peter Sergienko working with his gay son Eugene in Oregon; Richard Noble, from the Walk Across America; Attorney Stephen Zollman of the National Equality March; Jeff White-Perkins from Mississippi Gulf Coast Rainbow Center; straight-ally Jean Kryean of Pennsylvania, and Mika Covington and Ken Riter, who have joined forces in Iowa and Nebraska.

The new strategy is in sharp contrast to the Human Rights Campaign’s push for the Employment Nondiscrimination Law, now embroiled in community dissent because of the religious-exemptions that would leave our most vulnerable children behind. Groups including the ACLU, Lambda Legal, Equality California, Queer Nation NY, Equality Illinois, and others, strongly oppose the Senate version of ENDA, which would ensconce in federal law anti-LGBT discrimination in taxpayer-funded programs, as a concession for Republican votes, that entirely misses the point of organizing for social change.

“Seeking full equality is not just a legislative agenda, but is the antidote to the vast harm LGBT Americans endure under discrimination, which causes children to commit suicide, and keeps 53% of LGBT workers in the closet, living in daily fear,” said Todd Fernandez, campaign manager for The Equality Pledge Network. “The ENDA compromises are a sign of our movement’s strategic weaknesses, and they should not be accepted until we have first united in full force nationwide. We won this debate in Arizona with Republican Senators’ support, and it’s the debate we need to have as a nation to heal homophobia and transphobia in our culture.”

The Network’s information-filled website advances two main arguments: 1. That international law requires Congress to outlaw SO-GI discrimination, and 2. That the vast harm caused by discrimination, known as “minority stress,” makes this a public health emergency. As support, the site includes the United Nation’s Free & Equal campaign, the historic speech by former Secretary of State Hillary Clinton proclaiming “gay rights are human rights,” and congressional expert testimony of Dr. Illan Meyers of the Williams Institute, backed by official reports of the U.S. Civil Rights Commission, the American Psychological Association, and others.

The 2014 Campaign goals include 1. Increasing Pledge support from 245 to 500 organizations, 2. Establishing state leads in all 50 states, 3. Conducting a 2014 Equality Poll to map support in Congress, and 4. Mounting a PSA campaign about the “minority stress” impact including suicide and mental health disparities, such as depression, anxiety, and hypervigiliance.

The vigil will feature pictures of LGBT Americans lost to suicide and murder, Activists and religious leaders will carry rainbow flags and herald the contributions of LGBT civil rights heroes Eleanor Roosevelt, who led the way on the Universal Declaration on Human Rights, and Bayard Rustin, the gay human rights leader who was posthumously awarded the Presidential Medal of Freedom for his work leading to the passage of the 1964 Civil Rights Act, which his community yearns to join.

IOWA
Mika Covington, Iowa State Pledge Lead: “”As an new Iowan, I have come to experience equal rights here in Iowa. They are awesome. However, they are constantly under attack and we have to constantly fight to keep them. This is why it is more important than ever to get full federal human rights for everyone no matter their sexual orientation or gender identity. The fight forward is not over until all humans have full and equal human right.”

OMAHA, NE – If you are not able to volunteer for any of our events, you can do a great service by donating to our cause. The Nebraskans for Equality Blog is part of a nationwide movement to change the conversation on the LGBT movement called The Equality Pledge. The Equality Pledge stresses the LGBT Community and supportive elected officials come together to push for Full Federal Equality which involves a one bill strategy to add sexual orientation and gender identity to a broad of list of laws already granting existing protected classes protection in areas including: Public Accommodations, Public Facilities, Federally Funded Programs, Employment, Housing, Education, Credit, Federal Marriage Equality, Immigration, Disability, and Family Leave.

To help us move equality forward, just  a $5 donation can go a long way to reaching our goals for Full Federal Equality under the law. Will you donate to help fund equality? 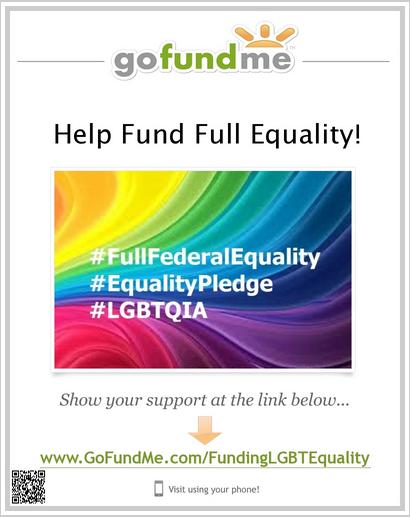 OMAHA, NE – Equality for all Americans is important, and of particular importance to our nation’s LGBT community. I am excited to donate some of my time to take on the task as a state lead for Nebraska for The Equality Pledge. and the American Equality Bill.

The time to push for Full Federal Equality has arrived.  ENDA has been introduced in every session of Congress since 1994, and has failed to pass.  The LGBT movement has been “piecemealing” our civil rights for so long, that people have forgotten that Marriage Equality and NonDiscrimination in Housing and Employment are just a small part of what we in the LGBT Community deserve as true and equal Americans. I say the people are growing weary. There is also a need to look to fairness in education, public accommodation, federal funding, and credit, among an entire list of civil rights that we should be demanding now and discussing everyday within our respective communities.

A day of action is coming.  May 17th is our first day of action to stand against homophobia and transphobia in cooperation between the people of the Full Equality Pledge and IDAHOT 2014. Omaha will have rally May 17th 2014, from 2pm-7pm on the NorthWest corner of 72nd and Dodge.  According to The Equality Pledge leader Todd Fernandez, “The key objective on May 17th is to bring local Pledge groups together to discuss and create a plan for coalition work focused on the Pledge, and on other state nondiscrimination priorities you may have.  It’s time to organize to win.  And July 2nd is the 50th Anniversary of the 1964 Civil Rights Act – so if not now, when?”
(FB Event Page: https://www.facebook.com/events/281157485379314)
See also http://dayagainsthomophobia.org

A new arm in the LGBT movement is rising to take up this responsibility of discussing and pushing the need for Full Federal Equality and that is The Equality Pledge.  Our message is that LGBTQIA Americans are entitled to full and equal federal nondiscrimination protection; first, as a matter of international human rights law, and urgently, as a matter of public health, to stop the horrible suffering caused by anti-LGBTQIA stigma in society.

The Equality Pledge supports the passage of an omnibus LGBT equality legislation that grants full non-discrimination protections on the basis of sexual orientation and gender identity equal to those accorded other statuses under existing civil rights laws and Supreme Court jurisprudence, specifically including:

This is an important turn in the history of the LGBT movement. Every individual and every group is warmly welcomed to this organizing that respects autonomy and diversity in strategy, messaging and tactics.  Retired organizers are rising up again, able to work by phone and email these days.  And LGBT community centers, state equality groups, and grassroots marriage equality groups, to name a few, are taking leading roles for May 17th.  The Equality Pledge has already received endorsements from over 225 groups from 44 states and the District of Columbia. These groups represent the full array of advocacy, direct action, faith-based, statewide, local, marriage, immigration, pride, transgender/gender-nonconforming, community centers, and other community constituencies.  See also: http://www.actonprinciples.org/thepledge